Below is a copy of my blog from the In-Depth Genealogist – http://theindepthgenealogist.com/gaelic-census-returns/

If you think Irish research is already too complicated, look away now! As you are aware, on-line access to the 1901 and 1911 census returns has been one of the great developments in Irish genealogy. However, perhaps you are one of those who have not been able to find your family on the census? One possible reason is that the family may have completed the census, particularly the 1911 census, in the Irish or Gaelic language. Gaelic was once the only language spoken in Ireland but it has gradually been replaced by English over the centuries and it is now spoken by only a small minority, although most Irish people have some capability in the language. However, Ireland in 1911 was going through a period of ‘Gaelic Revival’ during which all aspects of Irish heritage were popular. It was this movement which gave rise to the 1916 Rebellion and eventually to independence from Britain. The revival was promoted by many organisations, but particularly the Gaelic League, which still exists. One expression of the drive to embrace our Gaelic identity was the use of the Gaelic form of surnames. Names, I hear you say, are not usually translated into other languages! However, Irish history had seen a gradual process of Anglicization of family names into forms which were sound-alikes or direct translations of the old names. My family name, Ryan, for instance was originally Ó’Ríain. Other more complicated examples include Mac Giolla Bríde becoming Gilbride, or Ó’Murchú becoming Murphy. The Gaelic revival simply reversed this process and encouraged people to use the old form of their name. One such usage was the completion of official documents in Gaelic. This would have been seen as a form of defiance by some and as a logical expression of their cultural identity by others. Whatever the motivation, the consequence for historians is that there are families whose 1911 census information is entirely in Gaelic.
It should be noted that about 17% of Irish households in 1911 mainly spoke the Irish language, but most of these completed the forms in English. Completion of the forms in Gaelic by householders who were not residing in Gaelic-speaking areas is therefore usually an indication of strong nationalist identity. It was particularly popular in certain areas, perhaps because the Gaelic League was particularly active in those areas. Monaghan, for instance, is one of the counties where many households in some areas completed their returns in Gaelic. The illustration shows a census search for part of Monaghan where almost all the householders use the Irish form of their name. Just to be clear, this was a very small proportion of households overall, but what can you do to check this possibility? The first thing to do is to establish the Gaelic form of your name, and then search the census again using this name. Alternately, if you know the area they were from, you can do a search for all households in the area and look for names that might be anglicized into the English form of your name. There are quite a few sites which will provide the Irish name form including http://en.wikipedia.org/wiki/Irish_name. The returns will probably also use the Irish form of Christian names and occupations as well, but these can be translated. Google Translate has a facility for translation from Irish, for instance. One more complexity to add to the list folks, but show me where it said this was going to be easy! Slán. 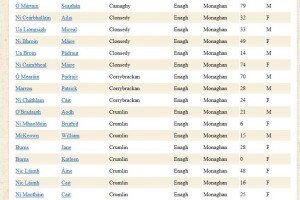